Astrocytes have long been viewed as supportive cells of the brain, but over the last decade it has become clear that they play an important role in most, if not all, brain diseases. The authors developed a method to generate astrocytic subtypes from human and mouse induced pluripotent stem cells (iPSC). They used these iPSCs to show that a certain astrocytic subtype is more affected in the rare and severe genetic disorder Vanishing White Matter (VWM), for example presenting expression changes in genes involved in the immune system and extracellular matrix. Comparative studies between human and mouse cultures revealed human-specific disease mechanisms, such as neuronal and mitochondrial functioning. This study underscores the importance of considering astrocyte subtype vulnerability in neurological disease, influencing in vitro disease modeling outcomes, and targeting the correct cellular subtypes in therapeutic approaches. 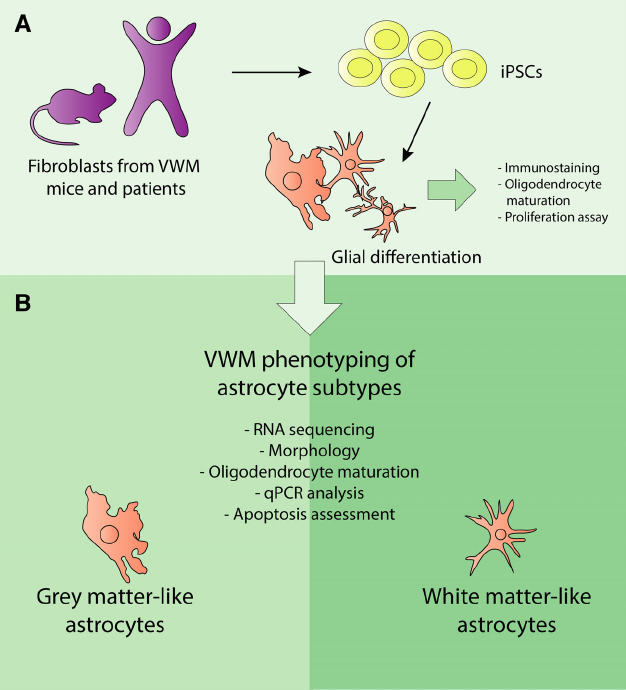 From: Leferink et al. 2019: Fig. 1. Experimental overview. Fibroblasts from human and mouse, both VWM genotype and control / wt, were reprogrammed to iPSCs, and differentiated to glial cells for various assays (1). The iPSCs were further differentiated to mouse and human grey and white matter astrocyte subtypes (2). The different astrocyte subtypes were used as an in vitro model for VWM, in which oligodendrocyte maturation and apoptosis, morphology, proliferation rate, and mRNA expression was studied.

A full-text pdf of the paper is available here.