Intestinal stem cells are in a continuous competition with each other in what is normally a neutral process. But this balance can be disturbed if one stem cell acquires a mutation that gives it an unfair advantage. The disruption of the adenomatous polyposis coli (APC) gene turns intestinal stem cells into super-competitors and can lead to colon cancer.

The thin, protective layer of cells lining the intestines is one of the most rapidly renewing tissues in the body, and for a good reason. The mission of these cells is to absorb water and nutrients from the gut, a hostile environment that quickly damages cells. Resident stem cell populations deep within the tiny undulated folds of the epithelial lining, called intestinal crypts, are responsible for generating new cells to replace those that are continuously lost. These intestinal stem cells can both self-replicate, producing more stem cells, or differentiate, becoming a variety of specialized cell types for different functions: a tightly controlled balancing act.

Disruption of a particular gene in intestinal stem cells, called adenomatous polyposis coli (APC), leads to the formation of premalignant polyps, which is the earliest step in the development of colorectal cancer. Exactly how mutations in this gene initiate cancer is a subject of intense study. Stem cells with mutated APC have been shown to outcompete and replace their healthy counterparts, but the mechanisms underlying this competitive advantage were unclear. A new study published in Nature from the lab of Louis Vermeulen, Principal Investigator at the Center for Experimental Molecular Medicine at Amsterdam UMC and the Oncode Institute, sheds light on why APC-mutant stem cells have the upper hand.

“Normally, this is a neutral process. But it can be disturbed if one stem cell acquires a mutation that gives it an unfair advantage.”

The signal conveying that advantage was identified as inhibitors of the Wnt signaling pathway, which is important for the proper regulation of gene activity that controls cellular proliferation and differentiation.

Importantly, the team discovered a way to interfere with the signals sent by APC-mutant stem cells. Lithium shifted the competitive benefit towards the healthy stem cells, and prevented APC-driven adenoma formation. “We revealed that boosting healthy intestinal stem cell fitness by using lithium, which activates the Wnt pathway, could revert this unfair competition and prevent the formation of adenomas,” says Sanne.

Mutations in the APC gene are one of the most common and earliest events that lead to the development of colorectal cancer. Inhibition of APC-driven super-competition could therefore be a powerful tool to prevent the initiation of intestinal cancer. This is especially relevant for patients with familial adenomatous polyposis (FAP), a disorder caused by a hereditary defect in the APC gene. FAP patients develop multiple adenomas in their intestine starting at an early age and are predisposed to the development of colorectal cancer. Treatment of these patients with lithium may block APC-mutant stem cells in the intestine and prevent colon cancer initiation and progression. As a medicine, lithium has been used to treat patients with bipolar disorder for decades. Prof. Louis Vermeulen: “We discovered that a similar set of Wnt inhibitors is expressed by FAP adenomas and therefore we propose the use of lithium as a chemoprevention strategy for FAP patients. We have recently acquired a grant from the Dutch Cancer Society (KWF) to perform a clinical trial studying this potential preventive strategy.” 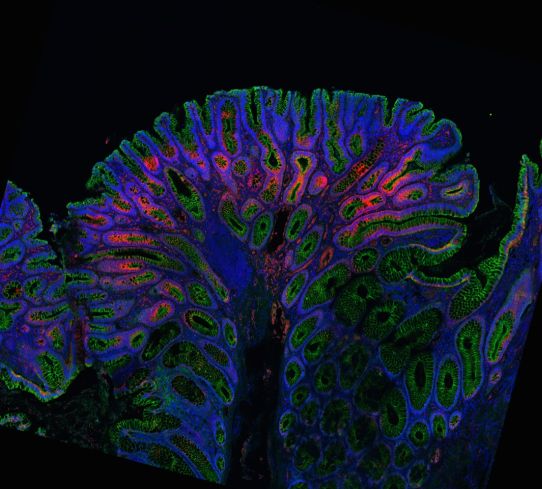