A decade of ‘Team Science’: the ENIGMA consortium reports

Researchers from all over the world, including a number of principal investigators and staff of Amsterdam Neuroscience (Amsterdam UMC), are part of the ENIGMA (Enhancing Neuro Imaging Genetics through Meta Analysis) consortium. This global consortium of over 1400 scientists across 43 countries, studies the human brain in health and disease and brings together researchers from the fields of imaging genomics, neurology and psychiatry. Last week in a review in Translational Psychiatry the last decade of large-scale studies of the brain by the ENIGMA consortium was summarized and in parallel an update on the genetic basis of cortical structures studied by ENIGMA was published in Science.

With 50 active working groups, the ENIGMA consortium has several goals: create a network of like-minded individuals, interested in pushing forward the field of imaging genetics; ensure that promising findings are replicated; share ideas, algorithms, data, and information on research studies and methods; facilitate training, including workshops and conferences on key methods and emerging directions in imaging genetics. Figure 1 illustrates the working groups of ENIGMA and their worldwide distribution.

Interested in the work of the ENIGMA consortium in the last decade? And want to read about uncovering the genetic basis of the brain? Read the review in Translational Psychiatry here (with amongst others Odile van den Heuvel & Dick Veltman c.s.). Or get informed by the genetic basis of cortical structures in the ENIGMA Science article here (with amongst others Anouk den Braber c.s.). See also the article by Odile van den Heuvel et al. in Human Brain Mapping with an overview of five years of the ENIGMA Obsessive-Compulsive Disorder (OCD) working group here. 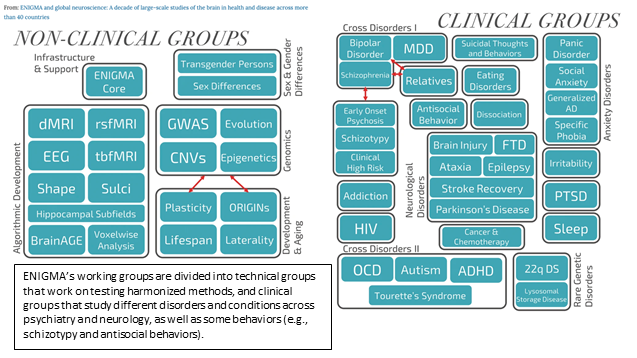